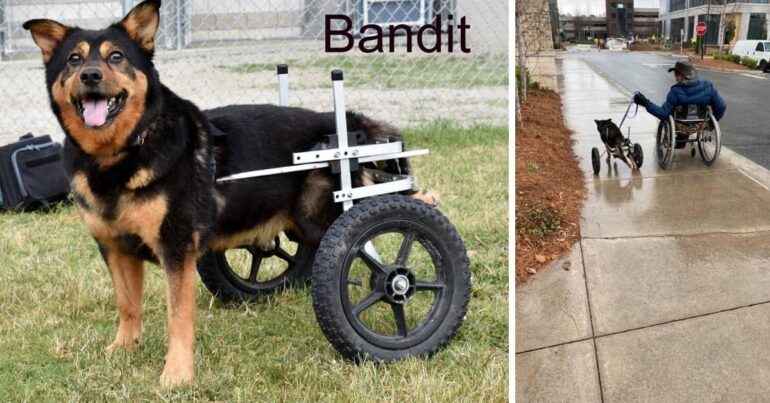 The process of finding a rescue dog the perfect home is never simple. There’s a lot that goes into making a good match, and not every dog is right for every family. For a paralyzed dog named Bandit, getting adopted was especially difficult. In five and a half years, Bandit was adopted three times. But in every case, he ended up right back where he started. Bandit has struggled to find the place where he belongs, but his rescuers and trainers are confident that the fourth time is the charm.

The older rescue dog has spent years in a special training program.

Bandit’s previous adopters all started their relationships with the best intentions. But as time passed, they all came to realize the same thing–they couldn’t handle the disabled dog’s special needs. Every time this happened, Bandit returned to his friends and trainers with Gwinnett County, Georgia’s Jail Dogs Program.
Jail Dogs is a unique program that pairs homeless dogs with inmates. The inmates spend every day caring for and training their assigned dogs. And once their training is complete, the dogs are put up for adoption. It’s a system that benefits both the dogs and the inmates.

Facebook
Jail Dogs has adopted out several trained rescued dogs over the past years. Bandit has been a part of the program since 2014, and he’s worked with several different inmates. Due to his disabilities, he has always required extra care and attention. The inmates, however, don’t seem to mind. They fell in love with the sweet dog from day one, and Bandit has always been a special member of their program. So when the news came that Bandit was once again getting adopted, it was a bittersweet moment.

It took years, but Bandit has found his special family.

Bandit’s previous three homes didn’t work out, but they weren’t like this one. The paralyzed dog’s newest adopter is Darrell Rider–a man who has been paralyzed from the waist down since birth. Rider told WMBF News,

“When you look at Bandit, if he was human, he’s me. “Going through what I went through in my life and growing up, life wasn’t easy, but you just gotta continue to move forward. The things I read about Bandit, the videos we saw, he kind of had the same mindset that I had.”

Facebook
Rider says he feels a special connection with the paralyzed dog. According to Jail Dogs, Bandit lost feeling in his lower extremities due to heart worm treatment. Since then, he has adjusted to life in a specially-made doggy wheelchair. It hasn’t always been an easy transition, but Rider and his wife Sue have thought long and hard about adding Bandit to their family.
Sue said,

“This is something that would motivate Darrell, and it would help Bandit to know he’s not alone out there.”

Facebook
With three failed adoptions, Bandit’s trainers were starting to fear he would never find the perfect home. He’s friendly and knows several tricks, but Bandit isn’t the average dog. Due to his paralysis, Bandit needs assistance going to the bathroom, and even with his wheels, mobility can be a challenge.
But when Darrel and Sue look at Bandit, they don’t see a dog that’s too much work. They see a fighter who should never feel alone. Bandit is on his way to a new life, and his family is confident they’re the perfect match.

This website uses cookies to improve your experience while you navigate through the website. Out of these, the cookies that are categorized as necessary are stored on your browser as they are essential for the working of basic functionalities of the website. We also use third-party cookies that help us analyze and understand how you use this website. These cookies will be stored in your browser only with your consent. You also have the option to opt-out of these cookies. But opting out of some of these cookies may affect your browsing experience.
Necessary Always Enabled
Necessary cookies are absolutely essential for the website to function properly. These cookies ensure basic functionalities and security features of the website, anonymously.
Functional
Functional cookies help to perform certain functionalities like sharing the content of the website on social media platforms, collect feedbacks, and other third-party features.
Performance
Performance cookies are used to understand and analyze the key performance indexes of the website which helps in delivering a better user experience for the visitors.
Analytics
Analytical cookies are used to understand how visitors interact with the website. These cookies help provide information on metrics the number of visitors, bounce rate, traffic source, etc.
Advertisement
Advertisement cookies are used to provide visitors with relevant ads and marketing campaigns. These cookies track visitors across websites and collect information to provide customized ads.
Others
Other uncategorized cookies are those that are being analyzed and have not been classified into a category as yet.
SAVE & ACCEPT
Home » Paralyzed Dog Finds The Perfect New Home After Three Failed Adoptions