Home » Meet Freddy, The Tallest Dog In The World

Meet Freddy, The Tallest Dog In The World 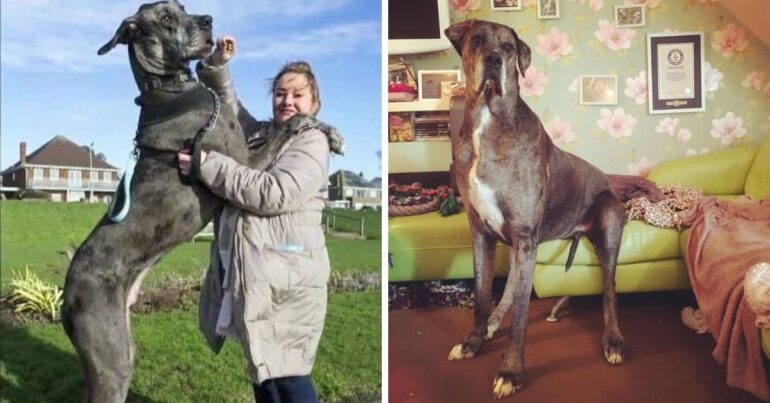 Freddy is the definition of a gentle giant.

He’s been called a horse on more than one occasion, but Freddy the Great Dane is 100% lovable canine. This gentle giant made it into the Guinness World Records back in 2016, and no dog has come close to dethroning him. He’s the tallest dog in the world, and life with this big boy is always interesting.

Freddy’s mom, Clair Stoneman, took Freddy home when he was a tiny puppy. He wasn’t feeding well, and he needed special care and attention to keep him healthy. But despite his rough start in life, it was clear that Freddy wasn’t going to be an average Great Dane. As one of the largest dog breeds in the world, Great Danes are already huge dogs.  It’s normal for the average male to weigh around 200 pounds and stand around 34 inches tall.
Clair knew Freddy would probably be bigger than average, but she never expected to be living with the tallest dog in the world.

Just how tall is the tallest dog in the world?

To earn his record-breaking title, Freddy was measured by an official Guinness representative. His official height is 40.75 inches tall. And when he stands on his back feet, he’s an amazing 7 feet and 6 inches.
Clair is extremely proud of her giant baby, and she doesn’t mind making accommodations for his huge size. They only go on walks early in the morning when everyone else is asleep, because Freddy’s surprising size tends to frighten other neighborhood dogs. Clair has also adjusted her grocery budget to ensure the tallest dog in the world gets all the right nutrition. Freddy eats a strict diet of raw meat and typically gets all the treats he wants.

Freddy also has a particular penchant for eating sofas. He’s helped destroy at least 26 furniture items, and that’s not counting all the couch cushions that get worn out due to his bulk. Of course Freddy is allowed on the furniture, and Clair says napping is one of his favorite things to do.
Freddy is the tallest dog alive, but the record for the tallest dog ever still belongs to Zeus, another Great Dane. Zeus died when he was five years old and was 44 inches tall.
Keep up with Freddy, the tallest dog in the world, on Facebook!

This website uses cookies to improve your experience while you navigate through the website. Out of these, the cookies that are categorized as necessary are stored on your browser as they are essential for the working of basic functionalities of the website. We also use third-party cookies that help us analyze and understand how you use this website. These cookies will be stored in your browser only with your consent. You also have the option to opt-out of these cookies. But opting out of some of these cookies may affect your browsing experience.
Necessary Always Enabled
Necessary cookies are absolutely essential for the website to function properly. These cookies ensure basic functionalities and security features of the website, anonymously.
Functional
Functional cookies help to perform certain functionalities like sharing the content of the website on social media platforms, collect feedbacks, and other third-party features.
Performance
Performance cookies are used to understand and analyze the key performance indexes of the website which helps in delivering a better user experience for the visitors.
Analytics
Analytical cookies are used to understand how visitors interact with the website. These cookies help provide information on metrics the number of visitors, bounce rate, traffic source, etc.
Advertisement
Advertisement cookies are used to provide visitors with relevant ads and marketing campaigns. These cookies track visitors across websites and collect information to provide customized ads.
Others
Other uncategorized cookies are those that are being analyzed and have not been classified into a category as yet.
SAVE & ACCEPT
Home » Meet Freddy, The Tallest Dog In The World