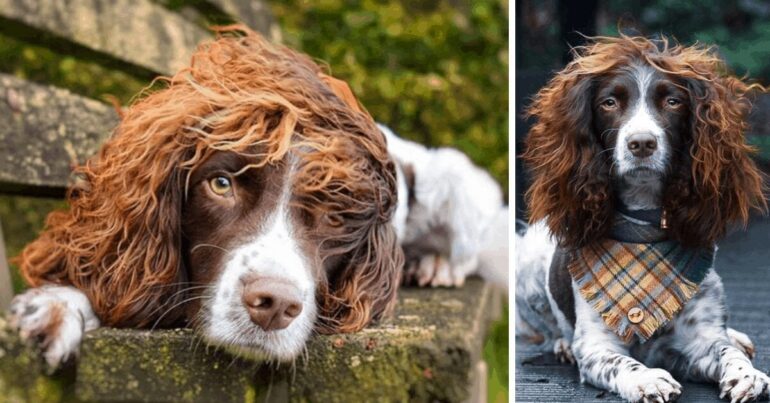 Finley’s unique good looks have earned him widespread fame. This Springer Spaniel has gorgeous golden eyes and the striking coat pattern typical for his breed, but it’s the hair on top of his head that grabs all the attention. Complete with beachy waves and brilliant highlights, Finley’s hair looks like it belongs in a shampoo commercial.

Look at this gorgeous Springer Spaniel!

According to Finley’s mom, Becca, the famous Finley’s signature hairstyle started when he was around six months old. During those puppy months, the hair on top of his head formed a mohawk any rockstar would want. And as the puppy grew up, so did his hair.
Now a strong and mature three-year-old dog, Finley’s hair inspires hair envy everywhere he goes. Becca says they’re frequently stopped in their hometown of Gloucester, UK so people can admire her dog’s beautiful hair. His glowing auburn locks tumble off his head to perfectly frame his handsome face.

Becca is obviously smitten with her good-looking dog, and after sharing a few photos of Finley online, thousands of others have fallen in love. Finley now has his own Instagram account with nearly 15,000 followers. He’s earned sponsorships from popular pet product companies, and he was even featured in a commercial for the organic food delivery service, Abel & Cole.
When Finley isn’t posing for the camera, Becca says he loves to spend time outside. She told BarkSpot,

“Finley absolutely loves getting soggy! He would find a puddle in a desert!”

Meet Taylor: A Dog Working To Save Koalas In Australia

A lot of Finley’s photos feature him dripping wet after a fun outdoor adventure. Even when he’s wet and muddy, this dog knows how to work the camera!
Becca says getting dirty is one of his favorite things to do, but he also loves his cuddles.

“As much as he is a typical Spaniel when out (getting filthy and running around like a lunatic), he is the biggest cuddle monster at home. He always has to be touching me.”

Finley even looks good with bedhead. .

As if we weren’t jealous enough, Finley’s perfect hair is fairly low maintenance. Becca brushes him regularly to prevent mats, and he gets a profesisonal groom every six weeks. Even with all the puddle jumping, Finley’s hair is naturally thick and shiny.
For Finley, life is all about finding the next puddle and doling out lots of love. Follow him on Instagram for more pictures of his handsome face!
All images courtesy of Instagram/finleythespringer Next, meet an adorable Dalmatian that wears his heart on his nose…literally. Click here to read more.

This website uses cookies to improve your experience while you navigate through the website. Out of these, the cookies that are categorized as necessary are stored on your browser as they are essential for the working of basic functionalities of the website. We also use third-party cookies that help us analyze and understand how you use this website. These cookies will be stored in your browser only with your consent. You also have the option to opt-out of these cookies. But opting out of some of these cookies may affect your browsing experience.
Necessary Always Enabled
Necessary cookies are absolutely essential for the website to function properly. These cookies ensure basic functionalities and security features of the website, anonymously.
Functional
Functional cookies help to perform certain functionalities like sharing the content of the website on social media platforms, collect feedbacks, and other third-party features.
Performance
Performance cookies are used to understand and analyze the key performance indexes of the website which helps in delivering a better user experience for the visitors.
Analytics
Analytical cookies are used to understand how visitors interact with the website. These cookies help provide information on metrics the number of visitors, bounce rate, traffic source, etc.
Advertisement
Advertisement cookies are used to provide visitors with relevant ads and marketing campaigns. These cookies track visitors across websites and collect information to provide customized ads.
Others
Other uncategorized cookies are those that are being analyzed and have not been classified into a category as yet.
SAVE & ACCEPT
Home » This Springer Spaniel’s Gorgeous Hair Will Give You Serious Hair Envy