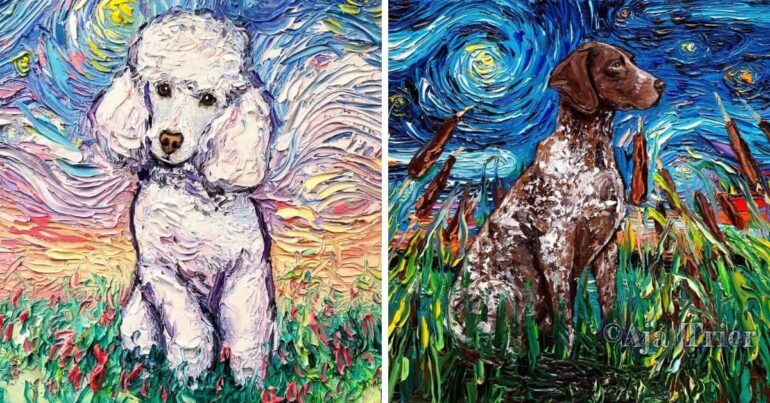 I don’t know much about art, but I think everyone under the sun at least recognizes the name Vincent van Gogh. I’d make a bet that you’re even familiar with his most famous work—”Starry Night.” Modern-day artist Aja Trier is more than a little familiar with this Post-Impressionist heavyweight. There’s no denying she’s a talented artist, and some people think she’s so good, they confuse her paintings with those of van Gogh himself. She’s had to set the record straight more than a few times, and her series of dog paintings are inspired by her favorite artist.

Look at those amazing colors!

Aja grew up fascinated by van Gogh’s unique style. She saw one of his works in person during a college trip in 2001, and in 2003, she made the jump to being a full-time artist. She’s been doing it ever since, and she sells her incredible paintings through her business, Sagittarius Art Gallery.
She uses ‘Starry Night’ as her inspiration, but she also puts a personal twist into everything she does. Aja told Bored Panda,

“The energy and flow of his unique art is what resonates with me. The thick strokes–I love being able to see the artist’s fingerprint in the art through their mark making. You can almost follow with your eyes the movements their hand made.”

While her dog paintings are my personal favorite, Aja has gotten the most attention for a painting she did of the Eiffel Tower. She called her piece “Seine,” and a picture of it ended up on Pinterest. This would have been great for her business, but whoever posted it was quite confused. The picture was posted with the caption, “Eiffel Tower by van Gogh.” Better yet, it went viral.

You could even commission a painting of your own dog.

Everyone was sharing the picture thinking it was van Gogh. And when Aja tried to correct people, no one believed her. She tried explaining that it was impossible for that to be a van Gogh painting. According to historical records, the artist never even saw the Eiffel Tower in its completion. That historical fact didn’t seem to matter, however, and people insisted Aja’s painting was something that it wasn’t.
Being a good sport about it, Aja decided to roll with it. She never claimed to be van Gogh. She even says she doesn’t think her paintings look anything like van Gogh’s, but she started a series entitled ‘van Gogh Never.” The theme is all things van Gogh never saw, and it’s incredibly clever.
There’s no knowing whether van Gogh ever saw a German Shorthaired Pointer standing regally among cattails or a Samoyed smiling through wildflowers, but we’re pretty sure he’d give these dog paintings a nod of approval. The colors and brushstrokes are beautiful, and even someone as art-illiterate as me knows these are something special.

Check out these amazing dog paintings!

You can have your very own van Gogh-inspired dog painting by visiting Aja’s website. She also sells her paintings on Etsy and Amazon.

All images via Facebook/Sagittarius Gallery

This website uses cookies to improve your experience while you navigate through the website. Out of these, the cookies that are categorized as necessary are stored on your browser as they are essential for the working of basic functionalities of the website. We also use third-party cookies that help us analyze and understand how you use this website. These cookies will be stored in your browser only with your consent. You also have the option to opt-out of these cookies. But opting out of some of these cookies may affect your browsing experience.
Necessary Always Enabled
Necessary cookies are absolutely essential for the website to function properly. These cookies ensure basic functionalities and security features of the website, anonymously.
Functional
Functional cookies help to perform certain functionalities like sharing the content of the website on social media platforms, collect feedbacks, and other third-party features.
Performance
Performance cookies are used to understand and analyze the key performance indexes of the website which helps in delivering a better user experience for the visitors.
Analytics
Analytical cookies are used to understand how visitors interact with the website. These cookies help provide information on metrics the number of visitors, bounce rate, traffic source, etc.
Advertisement
Advertisement cookies are used to provide visitors with relevant ads and marketing campaigns. These cookies track visitors across websites and collect information to provide customized ads.
Others
Other uncategorized cookies are those that are being analyzed and have not been classified into a category as yet.
SAVE & ACCEPT
Home » Artist’s Incredible Dog Paintings Are Clever Interpretations of Van Gogh’s ‘Starry Night’